Reading with a Summer Theme


Summer officially begins June 20, but you don't have to wait to read summery books. Here's a bunch of fiction and nonfiction for all ages - all available on our shelves. Short reviews from the catalog.

The lost summer of Louisa May Alcott, by Kelly O'Connor McNees.

Deftly mixing fact and fiction, Kelly O'Connor McNees imagines a love affair that would threaten Louisa's writing career-and inspire the story of Jo and Laurie in Little Women. Stuck in small-town New Hampshire in 1855, Louisa finds herself torn between a love that takes her by surprise and her dream of independence as a writer in Boston. The choice she must make comes with a steep price that she will pay for the rest of her life.

If you're more interested in zombies, then check out the graphic novel, Secret of the summer school zombies, by Scott Nickel ; illustrated by Matt Luxich.

Trevor thought nothing could be worse than spending the entire summer in school, until his teachers turned into homework-crazed creatures. Now Trevor and his friend, Filbert, must find a way to stop the zombies, or they'll be trapped inside the classroom of doom forever.

The illustrator, Matt Luxich started drawing when he was three years old. Although his parents didn't enjoy cleaning their son's cartoons off the walls, they supported his talent. Years later, Luxich attended the Kubert School of Illustration and Animation in Dover, New Jersey and now he is a freelance illustrator. You never know just where drawing on the walls will take you...

On the first day of camp, Cam already has a mystery on her hands: who set up a fake lockbox to steal campers' snack money? The second book in this three-book compendium follows Cam and her bunk mates as they try to find out who wreaked havoc in their cabin. The third story is about stolen sports equipment. As usual, the girl detective relies on her photographic memory and deductive reasoning to crack each case. 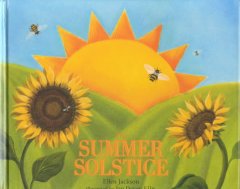 This book looks like a picture book, but is aimed at children in the 2nd - 4th grades. It shows customs and lore surrounding the longest day of the year. The author includes information about the summer solstice from many (mainly Western) cultures and locales, from the Chumash and Anasazi Indians to the ancient Egyptians, from Swaziland to Sweden. she offers a brief explanation of the earth's tilt, presents a solstice story adapted from a Hawaiian chant, and adds a few pages of solstice activities.

The girls of summer : the U.S. women's soccer team and how it changed the world, by Jere Longman.

Even if you don't follow soccer, you've heard stories of the final game of the 1999 Women's World Cup in the Rose Bowl - the game where the United States beat China on penalty kicks after two scoreless hours. The author, New York Times sportswriter Jere Longman, ventures off the field to discuss such topics as the rise of women's sports and women's soccer in Muslim countries. He highlights stars, such as Mia Hamm, Michelle Akers, and goalkeeper Brianna Scurry as well as less-heralded players, such as Christine Lilly, Carla Overbeck, and Sun Wen for China. The book captures the excitement of soccer and the extreme competitive nature of these women players. Game descriptions are so vivid that readers will feel they are watching the game on video.
Posted by Sue Heavenrich at 2:58 PM

Friday, May 20 is National Pizza Party Day. It's not a red-letter day on my calendar, but it is listed on the "silly holidays" calendar, so it counts. After all, we need some silly holidays to celebrate, and Friday is as good a day as any. (It's also Ride a Bike to Work day - so you can justify eating the pizza!)

The best way to celebrate is, of course, with pizza. If you don't have any pizza, a book will do. But not just any book - it's got to be a book about pizza, of course. Or at least have pizza in the title. Here are three you can find at our library. 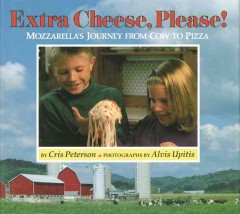 For the youngest readers, Extra cheese, please! Mozzarella's journey from cow to pizza, by Cris Peterson with photographs by Alvis Upitis.

Every Friday on their farm, Cris Peterson and her family make pizza. The cool thing - the cheese they use on top of the pizza comes from the cows in their own barn. Chris and her husband, Gary, own and run a dairy farm in Wisconsin. In this clear and concisely written book, Chris shows the steps of cheese making, beginning with the moment a calf is born and its mother first gives milk. Alvis Upitis, an internationally known photographer, has documented the process from start to finish. Bonus: there's a recipe for pizza included at the back. 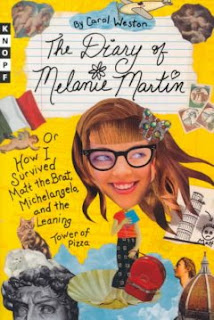 Older readers might enjoy reading The diary of Melanie Martin, or, How I survived Matt the Brat, Michelangelo, and the Leaning Tower of Pizza, by Carol Weston. We're not supposed to snoop in other people's diaries. It's rude. But in this book we've got permission....
Dear Diary,
You will never in a million years guess where we're going.
Nope. Guess again. Never mind. I'll tell you. Italy! We're going to ITALY! In Europe!! Across the ocean!!! I even have a passport. It's really cool, except I'm squinting my eyes in the photo so I look like a dork. At least that's what my brother said. I call him Matt the brat. You would too. Trust me. . . .

Ten-year old Melanie is off to Italy on a family vacation with her art-obsessed mom, her grumpy dad, and her annoyingly cute 6-year-old brother. But Italy isn't exactly everything Melanie expects it to be. As she discovers Michelangelo, gelato, and the joy of penning poetry, she also discovers how much her crazy family really means to her. Maybe she won't trade them in after all. 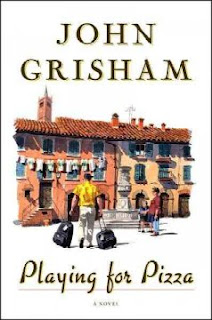 Playing for pizza, by John Grisham.

This is the story of Rick Dockery, a third-string quarterback for the Cleveland Browns. In the AFC Championship game against Denver, to the surprise and dismay of virtually everyone, Rick actually got into the game. With a 17-point lead and just minutes to go, Rick provided what was arguably the worst single performance in the history of the NFL. Overnight, he became a national laughingstock and, of course, was immediately cut by the Browns and shunned by all other teams.

But all Rick knows is football, and he insists that his agent, Arnie, find a team that needs him. Against enormous odds Arnie finally locates just such a team and informs Rick that, miraculously, he can in fact now be astarting quarterback. Great, says Rick—for which team?

The mighty Panthers of Parma, Italy. Turns out that Italians do play American football, and the Parma Panthers desperately want a former NFL player—any former NFL player—at their helm. So Rick reluctantly agrees to play for the Panthers and heads off to Italy. He has never been to Europe, is clueless about where Parma is located, and doesn’t speak or understand a word of Italian. 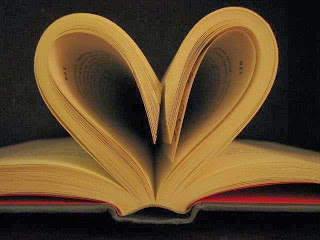 The annual Spring Book Sale happens Friday & Saturday, May 13 -14 and the basement shelves are overflowing with books. This is the perfect time to stock up on summer reading for the beach, riding-in-the-car, lounging by the pool, or waiting for the rain to stop.

You’ll find histories, mysteries, sci-fi, westerns, bird books, bug books, books for kids and books for teens... enough to fill your book bag and then some. You might even find a DVD or two, maybe a sound recording. There are many treasures to be found, and the Friends of Candor Free Library have been busy sorting and shelving and stacking to make it a bit easier for you to find what you're looking for.

How to make your Book Sale fun and stress-free: