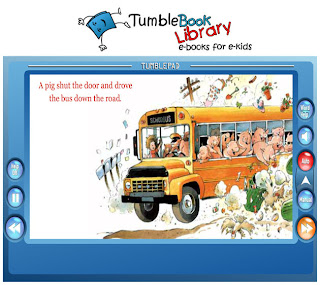 TumbleBook Library is an online collection of electronic children's books you can access through a link on the library website.
TumbleBooks are created by taking existing picture books, adding animation, sound, music and narration to produce an electronic picture book which you can read, or have read to you.  The library also includes chapter books and classics for older children in audio book and e-book formats, multi-cultural topics, foreign language and bilingual books. Non-fiction books, videos, book reviews through Tumble TV, puzzles, and games add to the versatility of the library.
Audio books are full length, unabridged, streaming audio books. In addition to the foreign language books, you can choose from a language drop down menu and view the entire website in Spanish or French. Spelling, concentration, and fill-in-the-blank games developed to reinforce concepts from the books and puzzles using illustrations from the books are also available.
Go to the Tumblebook Cloud to access books for Middle School and High School Readers.
Here is a link to the Tumblebook Library Virtual Tour so that you can see all of the great things you can access through Tumblebooks!     Tumblebooks Virtual Tour 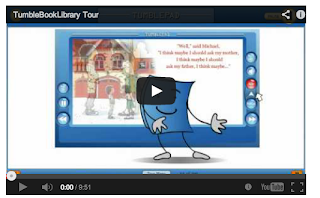 You can access the TumbleBook Library through the link below. You will need your Patron Barcode Number and your Password (last 4 digits of your registered phone number).

TumbleBooks are created in flash animation. If you are having trouble entering the site or viewing any of the books or quizzes, make sure you have Adobe Flash Player Plugin, version 7 or higher.
To download Adobe Flash Player free of charge

Email ThisBlogThis!Share to TwitterShare to FacebookShare to Pinterest
Labels: TumbleBook

Oh the Things You can Do with Books 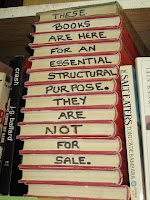 Some people use stacks of books to hold up shelves

Others build reading nooks out of their books 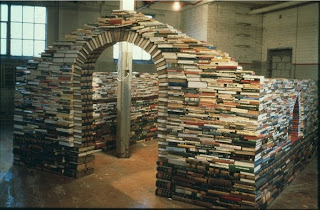 And Brazilian artists Marcos Saboya and Gualter Pupo installed a maze of 250,000 books at the Southbank Centre in London. The maze forms the shape of writer Jorge Luis Borges' fingerprint. 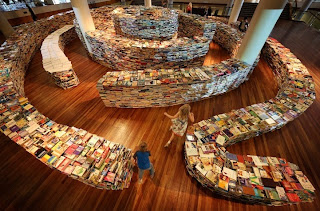 What do you do with books when you're not reading them?
Posted by Sue Heavenrich at 12:30 AM

New books for kids of all ages - and just in time for Summer Reading!

The Return of the Library Dragon tells what happens when the new school librarian media center director decides to replace books with digital devices. The previous librarian (a dragon) comes out of retirement to deal with the problem in a most appropriate way.

Meanwhile, the dog in Doggone Feet is trying to keep up with who's new in the family - based on what she sees from under the table. A fun rompy book about music and feet and what it means to be a family.

Want to meet bugs up close and personal? What better way than face-to-face? That's what you get in Face Bug - a book full of poems about different insects, plus a story about the "Bug Museum" and the beetle buddies who get in trouble in the "Hall of Smells". Great fun to read aloud.

Ever wondered what life was like aboard a pirate vessel? Privateer's Apprentice is a historical fiction set in the early 1700s - and young Jameson Cooper has found himself in jail by misfortune, not misdeed. His life turns topsy-turvy when he's kidnapped by the Queen's privateers, who are out to map the New World and claim new lands for England... and if they happen to come home with pockets full of Spanish gold, that's OK, too.

The Universe of Fair is a mix of quirky science and county fair and growing up and having to take care of your younger sister and maybe ghosts in the cemetery (or at least an old ghost tale). As the main character points out: if molecules and atoms and electrons and quarks were put together in a different way, we could just as easily be earthworms.

Dewey's Nine Lives is a story of how animals and people connect - from a divorced mother in Alaska who saved a drowning kitten on Christmas Eve to a troubled Vietnam veteran whose heart opened to a rescued cat. A great book for all ages. 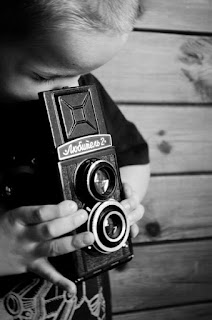 This summer the Library is sponsoring two scavenger hunts. For July, find things in nature. Just check off the things you find. If you have a camera, take photos of the items - we can post your photos on the bulletin board. IF you don't have a camera, check one out from the library!

2. something that is round

3. something that is orange

4. something that is soft

5. something that is square

7. something that is long

8.  something you can rip

9. something that is black

10. something you can draw with

11. something that can bounce

12. something that is scented

13. something you can eat

15. something that makes noise
Posted by Sue Heavenrich at 12:30 AM

Summer Reading at the Candor Library goes from July 8 - August 17, so find your library card and head over to check out what's on the shelves. Every week there's a new activity and small prize for readers. Reading participants are encouraged to fill out a ticket for each book they read - at the end of the program there's a drawing for gift certificates to Barnes & Noble bookstores.

There's a category for every reader:
All you need to do is drop by the library to pick up a Summer Reading log and some good books.
And for pre-schoolers looking for something to Dig Into - check out the backpacks. There's one with dinosaur books and activities, and another that features trucks and construction equipment. 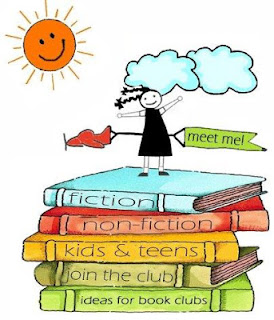 There's a Tween Book Club for rising 5th - 7th graders this summer. The first meeting is Wed. July 10, from 10 - 11:15 am. Join the group for a book discussion, activities and snacks. Pat Musa is advising the book club and has a lot of cool things planned.

The group has already started reading their first book,
Savvy by Ingrid Law. "Savvy" is that weird talent that you get when you turn 13 - like being able to create electricity, or churn up a hurricane.

How the Tween Book Club works: participants receive a copy of the book to read and then gather to share what they think about the book. There are two more gatherings scheduled for the summer, so if you want to participate, now's the time to contact the Library.
Posted by Sue Heavenrich at 12:30 AM