HOURS
Monday, Wednesday, Friday: 2 pm-5 pm
Tuesday & Thursday: 10 am- noon; 2 pm- 5 pm; 6 pm- 8 pm
Saturday: 10 am- noon; 2 pm- 4pm
CANDOR FREE LIBRARY IS CLOSED THROUGH APRIL 13.
All public activities at the library are cancelled. All items currently on loan have been renewed until May 1.
If you have any questions you may contact:
The library director at director@candorfreelibrary.org
Board of Trustees president, Melvin Foster at candorite@gmail.com
or send a message through the library Facebook page

Each year the Candor Free Library Association holds an annual meeting to go over annual reports and elect trustees to serve on the board. This year's meeting is scheduled for Wednesday, January 13 at 6:30 7:00 pm.

The regular Board of Trustees meeting will follow the annual meeting.
Posted by Sue Heavenrich at 6:30 AM

This is the season for snowball fights, hot cocoa, and reading together. Here are a few of the holiday books Candor has on the shelves, beginning with Hanukkah (which starts December 6) and ending with Kwanzaa (from December 26 to New Year's Day) 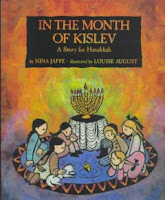 In the month of Kislev : a story for Hanukkah, by Jina Jaffe.
Without money for even a single latke, the Mendel children stand under the window of the wealthy merchant, Feive. They just want to savor the rich scent of his golden latkes. But Feivel doesn't share anything, and when he discovers the children on the eighth night he insists they face Rabbi Yonah's judgment.

Bubbie and Zadie come to my house : a story for Hanukkah, by Daniel Halevi Bloom.
Bubbie and Zadie are magical grandparents who arrive on the first night of Hanukkah. They arrive in time to share potato latkes, sing along while the boy and his sister spin the dreidel, and recall stories about the Maccabees and the small bit of oil that lighted the lamps for eight days. Before soaring off to visit other children around the world, the grandparents promise to return for the holiday each year. 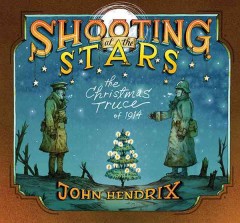 Shooting at the stars : the Christmas truce of 1914, by John Hendrix.
In 1914 France, a British soldier writes to his mother about the strange events of Christmas Eve and Christmas Day. Despite fierce fighting earlier from both sides, Allied and German soldiers ceased firing and came together on the battlefield to celebrate the holiday. They sang carols, exchanged gifts, and even lit Christmas trees. But as the holiday came to a close, they returned to their separate trenches to await orders for the war to begin again.
The story is based on fact, with additional information about World War I and the Christmas Truce and its aftermath, and an archival photograph taken during the Truce.

Holidays are a great time to read your old favorites, like How the Grinch stole Christmas by Dr. Seuss. 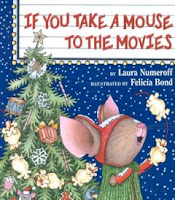 And don't forget a certain infamous demanding mouse...
If you take a mouse to the movies, by Laura Numeroff
When a boy takes a mouse to the movies, the mouse wants popcorn, which he strings together and wants to hang on the Christmas tree that the boy buys for him. On the way home, the mouse wants to play in the snow but then needs to warm up at home, where he sings Christmas carols and wants to decorate the tree. His popcorn string is missing, so he wants to make another, which reminds him of the movies . . .

The story of Kwanzaa, by Donna L. Washington 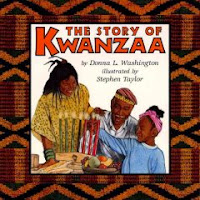 This is an introduction to Kwanzaa that provides a brief sketch of African-American history and the origins of the festival. It explains the structure and customs of the seven days of Kwanzaa, and includes a craft and cooking project.

For more holiday stories, check out this post, and this one.
Posted by Sue Heavenrich at 12:42 PM

As part of our responsibility to the community in limiting the spread of Coronavirus, the library will be closed from 3/16 through 4/13
Library Board of Trustees ~ meet the second Wednesdays of the month (except summer and December). Meetings open to the public; for more information call the library.
Friends of the Library ~ meet the last Thursday of each month at 7 pm (except November and December).