It's Banned Book Week - Celebrate Your Freedom to Read 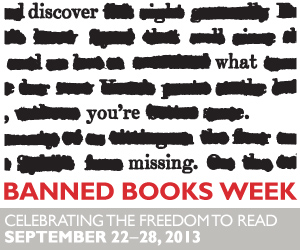 The best thing about libraries is that you can walk in and find great books to read - and you don't have to buy them. If the book you want isn't at our library, you can probably get it through interlibrary loan.

But there are some times when people want to push certain books off the shelves. They are "too graphic" or the main character is homosexual and they don't want their children - or anybody else - to be "exposed to" that book. Even now, in the 21st Century, people and groups challenge books in an effort to get them removed from their children's classroom, a school library, a school system, a town library.

Some of our greatest literature has been banned. Back in 1885, when the Concord Public Library banned Mark Twain's Adventures of Huckleberry Finn, Twain told his editor, "This will sell us another twenty-five thousand copies for sure."

More recently, Harry Potter showed up on the list of the challenged and banned. And last year, Captain Underpants topped the list. You will find these - along with other great books that have been challenged and banned - in our library. Why? Because, as Supreme Court Justice William J. Brennan, Jr. said back in 1989, "If there is a bedrock principle underlying the First Amendment, it is that the government may not prohibit the expression of an idea simply because society finds the idea itself offensive or disagreeable."


Some people celebrate "Banned Book Week" by reading a banned book. Here are a few titles to get you started. The entire list of 100 books is at  http://www.ala.org/bbooks/top-100-bannedchallenged-books-2000-2009

Harry Potter (series), by J.K. Rowling
Alice series, by Phyllis Reynolds Naylor
The Chocolate War, by Robert Cormier
And Tango Makes Three, by Justin Richardson/Peter Parnell
Of Mice and Men, by John Steinbeck
I Know Why the Caged Bird Sings, by Maya Angelou
His Dark Materials (series), by Philip Pullman
The Perks of Being a Wallflower, by Stephen Chbosky
Fallen Angels, by Walter Dean Myers
Captain Underpants (series), by Dav Pilkey
The Adventures of Huckleberry Finn, by Mark Twain
The Bluest Eye, by Toni Morrison
Forever, by Judy Blume
Catcher in the Rye, by J.D. Salinger
To Kill A Mockingbird, by Harper Lee
The Giver, by Lois Lowry 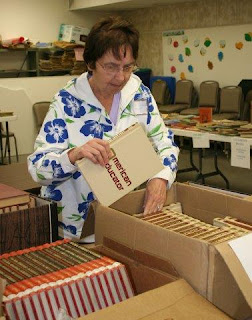 The Friends of Candor Free Library are once again accepting donations of good, clean, used books for the fall book sale. Got any histories, mysteries, politics, wildlife, pets, parenting. gardening, cooking, romance, westerns, sci-fi or children's books sitting around collecting dust? This is the perfect way to clear your shelves - and make space for all the new books you'll be picking up at the book sale next month. It's also a perfect way to share your much-loved books with other readers.

The Friends are not accepting:

It's Story Hour time again!
Starting Tuesday, September 10, story hour happens at the library from 10:15 to 11-ish. Terry-the-story-lady has been leading this fun-filled book and activity time for the past few years and is looking forward to sharing new books with children and their caregivers.

Story Hour is more than books. Terry shares finger plays, activities, a parachute game - and she reads some good picture books that kids love. There's even a snack, because reading can take a lot of energy!

While Story Hour is aimed at the preschool crowd, there are children of all ages up to five years. Some older homeschooling siblings have been known to tag along and help out, though the library is open for those who might want to do homework or look something up for a report.

If you're interested, just drop in on Tuesday and check it out. And remember, when the Union-Endicott and/or Candor schools are closed due to a weather emergency, there's no Story Hour.

Room to Write at the Library


Our little town library is full of readers. But did you know it's also a place where local writers meet to talk about writing and, sometimes, write? 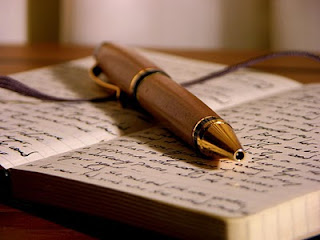 The Write Now writer's group has been meeting at the back table on the first Wednesday night of each month since... well, for many years. The group meets from 7 - 9 pm to learn more about the craft of writing, share ideas, support each others work, offer positive critiques, and catch up with news.

Sharing is the biggest part of the group's informal meetings. But don't think it's all small talk; these are serious writers helping each other towards a goal of getting published.

So what do writers talk about when they get together? Manuscript preparation, publisher's guidelines, setting goals, writer's block, plotting, character development, how to do research, querying an editor... the list is endless. While writers do bring their work to read - and get feedback on - there's no rule that members have to bring something to read each month. Some meetings are question/answer sessions or brain-storming.

Membership is open to any serious writer who is 18 years old or older, and there is a small lifetime membership fee. For more information on membership or visiting the group, contact author Carol Henry at carolhenry@frontiernet.net or 607-659-7661.

Check the "what's happening @ the library" calendar for meeting dates.

Posted by Sue Heavenrich at 1:30 AM